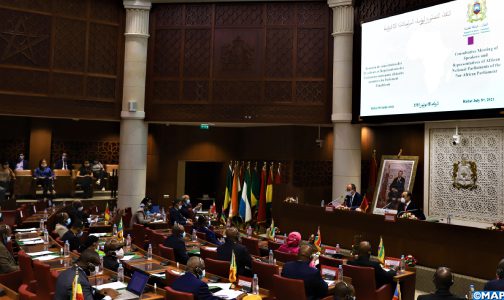 Speaking at a consultation meeting of speakers and representatives of African national parliaments members of the Pan-African Parliament, chaired by the speakers of the Houses of Representatives and Advisors, Habib El Malki and Hakim Benchamach, they commended the continued commitment of the Kingdom of Morocco and HM King Mohammed VI for a fruitful cooperation, solidarity between African peoples and development of the continent.

“The initiative of the Kingdom of Morocco to host this important consultation meeting to seek together appropriate solutions for the future of the Pan-African Parliament, in order to restore its letters of nobility, must be welcomed and congratulated,” said speaker of the National Assembly of Gabon, Faustin Boukoubi.

For his part, the first vice-president of the National Assembly of Senegal, Abdou Mbow, praised the Moroccan Parliament for having taken the initiative to organize this meeting, noting that the Pan-African Parliament should remain, for all, a privileged framework of exchange and permanent dialogue, in compliance with the principles and fundamental rules that govern this institution.

President of the delegation of Benin, Madegan Fagla, also thanked Morocco for having taken the initiative to organize this meeting and to host it at this time of crisis in the Pan-African Parliament.

The representatives of the other delegations were unanimous in condemning the deplorable acts and deeds committed during the 4th ordinary session of the Pan-African Parliament, held recently in South Africa, calling for the respect of the legal provisions governing this institution which is supposed to defend the interests of all African people.