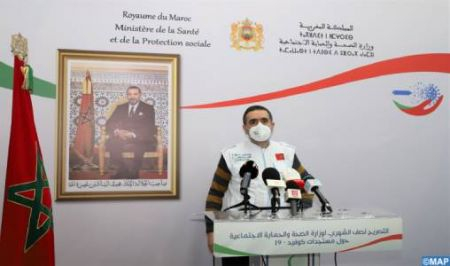 Covid-19 cases linked to the Omicron variant are more and more numerous in Morocco, which has recorded the first death due to the new strain of the virus, the ministry of Health and Social Protection said on Tuesday.

The death concerns an elderly woman who had not yet received the third booster dose of the anti-Covid vaccine, knowing that 7 other people infected by this variant were admitted to the resuscitation and intensive care units, the Ministry said in the bimonthly assessment of the epidemic situation in Morocco (December 20, 2021/January 3, 2022), presented by the coordinator of the National Center for Emergency Operations of Public Health, Mouad Mrabet.

Morocco has been experiencing, for three weeks, the third wave of community transmission, he said, noting that the indicators show that this wave is characterized by “a large weekly variation in the number of cases”.

This lightning acceleration of the contaminations was confirmed by the level of weekly evolution of the rate of positivity, passed from 1,6% the first week to more than 10% during the last week, with a reproduction rate of 1,39, he added.

Cases admitted to intensive care and resuscitation have increased with 152 new cases during the past week, compared to 42 in the week before, the official added.

Although deaths remain “low”, they are beginning to increase from 13 cases in the first week of community transmission to 27 in the third week, he noted.

On the other hand, the national vaccination campaign has experienced a slight change, with a rate of primary vaccinated established at 67.3%, 63% for the second dose and 8.5% for the third dose, a rate of progression of 20% for the last category.

The Ministry reiterated its call to all citizens to continue the strict observance of preventive measures in force and adhere massively to the national vaccination campaign, especially the third dose that will contribute to strengthening immunity and face the new variant Omicron.