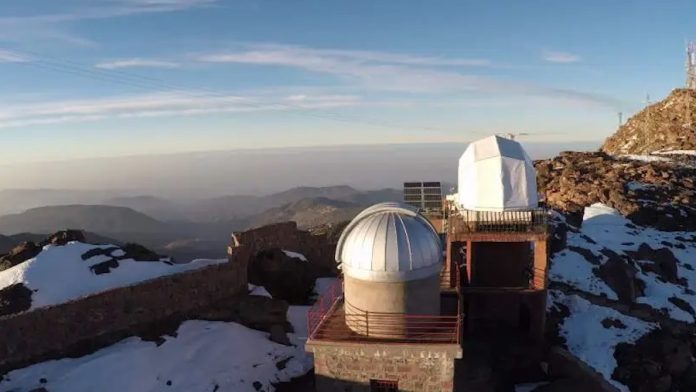 An afterglow (or optical counterpart) of a Gamma-ray burst (GRB) was detected by the MOSS telescope at the Oukaimeden Observatory on May 14 at 9:58 p.m. UTC.

The observation was made at 8:00 a.m. after the alert was given jointly by the space telescope FERMI of NASA and the INTEGRAL Satellite of the European Space Agency (ESA), both dedicated to the detection of Gamma-ray bursts, says the Observatory of Oukaimeden in a statement, noting that the source is named GRB220514A.

“There was an explosion on May 14, which gave rise to this signal. Eight hours after receiving the alert, we pointed the MOSS telescope to the position indicated by two telescopes: NASA’s FERMI and ESA’s INTEGRAL, and indeed we detected this signal and we published this result in a circular dedicated to this type of event,” explained Pr. Zouhair Benkhaldoun, researcher at the Faculty of Science Semlalia of Marrakech (FSSM) under Cadi Ayyad University and director of the University Observatory Cadi Ayyad, in a statement to the press, adding that the telescope of the Observatory of Oukaimeden is the only telescope in this part of the globe that has detected this phenomenon.

Gamma-ray bursts remain to this day a mystery and a subject of research very much in vogue in what is now known as “multimessenger astronomy”. A network called GRANDMA and gathering several observatories around the globe has been formed to monitor this phenomenon very popular with researchers.

These bursts, when they are located at a distant distance, can have as a source “processes involving neutron stars, black holes or hypernovae, or even astrophysical phenomena unknown to date”.

The observatory of Oukaimeden, under the Faculty of Science Semlalia of Cadi Ayyad University joined the GRANDMA network a few months ago and began observations recently (April 2022) with the following telescopes all operated on the site of Oukaimeden: the MOSS Telescope, the OWL Telescope of the Space Agency of South Korea and the telescopes of the Moroccan Association of Astrophotography.

This last association has just built an observatory called HAO (High Atlas Observatory) at the observatory of Oukaimeden and has co-signed the circular having been published following this discovery.

Beyond the great first that has just realized the observatory of Oukaimeden with this discovery, the program of follow-up of the Gamma-ray bursts comes to concretize again, the cooperation between professionals and Amateurs in Morocco known under the acronym ProAm in the field of the sky sciences.