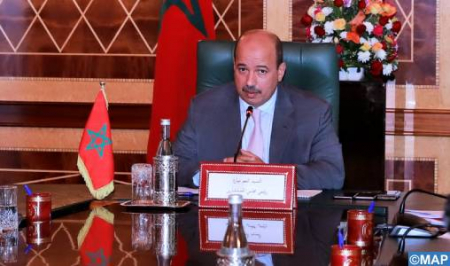 Food security is one of the major challenges facing the international community, in general, and the Arab world and Africa, in particular, said the Speaker of the House of Advisors (upper house) and Chairman of the Parliamentary Network for Food Security in Africa and the Arab World, Naama Mayara.

“The issue of food security is very important for countries in both regions, especially since it is among the major challenges alongside the fight against the socio-economic and health impacts of the pandemic, as well as the fight against the effects of climate change and sustainable development”, Mayara pointed out Thursday at an extended virtual meeting of the Executive Board of the Parliamentary Network for Food Security in Africa and the Arab World.

“This is a real challenge requiring the unification of efforts to ensure a healthy and balanced diet of all people in both regions”, he argued, recalling in this regard the impact of the pandemic on the supply chains of food between countries, and the firm restrictions imposed on the movement of traffic.

He also stressed the need to multiply efforts to improve African and Arab indicators of food security and protect societies in both regions against dangers threatening their food, social, health and environmental security.

Mayara also called for the promotion of partnerships between the various producers and importers, underlining the urgent need to establish alliances to address the constraints on improving the rate of self-sufficiency of different countries.

“This meeting aims to strengthen dialogue and exchange expertise on strategic issues related to food security in both regions, as well as to formulate proposals on the activation of the role of the network and the development of its action plan”, he said.

In this regard, Mayara stressed the importance of working as an alliance to strengthen parliamentary dialogue on issues related to food security and formulate proposals to facilitate joint parliamentary action, alongside governments and various departments concerned, through the promotion of investment to ensure the sustainability and diversification of food production and address the constraints to achieve the expected growth.

“Parliamentarians and the Network are called upon to contribute to global efforts to achieve the Sustainable Development Goals, including Goal II on eradicating hunger by 2030, ensuring food security and strengthening sustainable agriculture”, he underlined.

On this occasion, Mayara highlighted recommendations on the establishment of a roadmap and an action plan of the Network while setting out priorities and means of interaction of the Network with national and regional governmental bodies in Africa and the Arab world, as well as with the various international organizations concerned.