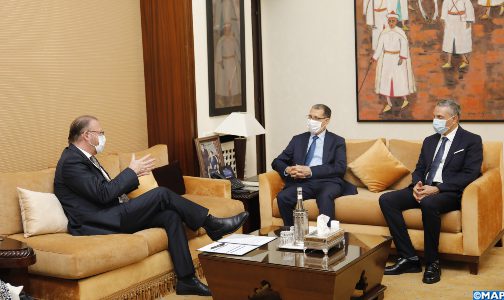 The Head of Government Saad Dine El Otmani met, on Monday, with President of the Parliamentary Assembly of the Council of Europe (PACE) Rik Daems, on ways to strengthen the partnership between the Kingdom and this European institution.

This meeting was an opportunity for the two parties to examine the prospects of consolidating the partnership between Morocco and PACE, as well as the strengthening of cooperation in areas related to the missions of the Parliamentary Assembly, mainly support for human rights, the promotion of democratic practice and the guarantee of the rule of law, through a set of related international conventions, said the department of the head of government in a press release.

Daems, who is on a working visit to Morocco, expressed PACE’s satisfaction with Morocco’s position in the region and the progress it has made in terms of socio-economic development. He also expressed the readiness of this institution to consolidate its partnership with the Kingdom and make it a key partner in the African continent, it said. For his part, El Otmani recalled the major reforms undertaken by Morocco for several years in the area of human rights, including in the upholding of democratic practices, the guarantee of freedoms, the promotion of women’s rights, the fight for parity and against violence against women, among other important reforms that have been implemented through a series of mechanisms.

He also highlighted Morocco’s continued openness to dialogue with its partners and its constant availability to engage in any initiative aimed at strengthening cooperation and partnership with the Council of Europe and with the European Union and its institutions in various fields, within the framework of mutual respect for the specificities of the two parties.