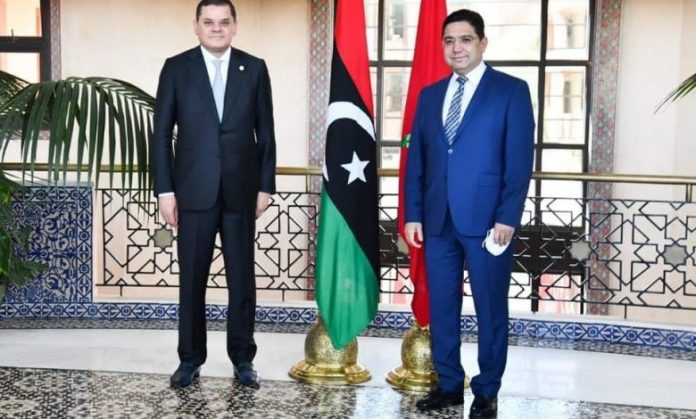 The head of the transitional government in Libya Abdelhamid Dbeibah welcomed, on Sunday in Rabat, the efforts made by the Kingdom of Morocco to achieve stability in his country.

“This visit reflects the deep gratitude to  King Mohammed VI for the efforts made to unify Libyan institutions and ensure Libya’s political and security stability,” said Dbeibah during a press conference following his talks with Minister of Foreign Affairs, African Cooperation and Moroccans Abroad Nasser Bourita.

He added that this visit also takes place within the framework of the strengthening of communication and the consolidation of bilateral relations in all fields in the service of the interests of the two brotherly peoples.

“We aspire to the holding of the Joint Committee on Consular Affairs, as agreed on by the two Foreign Ministers during their recent meeting in Rabat, which will help facilitate the granting of visas for studies and residence in the two countries”, said the Libyan official, stressing that the 9th meeting of the Moroccan-Libyan joint committee is planned to be held in the Kingdom.

The Libyan top official insisted on the need to revive the Arab Maghreb Union, which would help overcome all the difficulties and address all the challenges in the region.