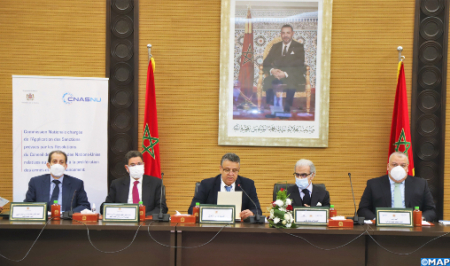 The National Committee in charge of the implementation of UN Security Council sanctions related to terrorism and arms proliferation and their financing was inaugurated, Wednesday in Rabat, in the presence of senior officials of the concerned institutions.

The Committee is placed under the chairmanship of the Minister of Justice and includes, among its members, representatives of 15 governmental, judicial, security and financial bodies.

The establishment of this legal mechanism is part of the Kingdom’s compliance with its international commitments and the alignment of its system with global standards, primarily the Security Council resolutions and the recommendations of the Financial Action Task Force (FATF), calling on States to adopt effective provisions and instructions for the implementation of these sanctions.

The Committee will consider the activation of measures to freeze the assets of natural or legal persons whose names are cited in the Security Council resolutions, as well as the implementation of travel ban decisions in accordance with the applicable rules.

The creation of this new entity was enacted in Article 32 of Law 12.18 amending and supplementing the Penal Code and Law 43.05 on the fight against money laundering, which determined the composition and mode of operation of the Committee (Official Bulletin No. 7.014, August 19, 2021).

During this ceremony, the Minister of Justice, Abdellatif Ouahbi, stressed the role that the Committee will play in strengthening the national system of combating terrorism and the proliferation of weapons, noting that his department, as a supervisory authority, has taken operational measures to facilitate the committee’s mission, including the creation of a website and a platform of internal regulations.

The installation of this committee reflects the sincere desire of Morocco, under the leadership of His Majesty King Mohammed VI, to dry up the sources of illicit funds and to enforce the international legal system in this area.

The Public Prosecutor at the Court of Cassation and President of the Public Prosecution, El Hassan Daki, assured that the new mechanism provides an answer to a series of legal problems resulting from the lack of an integrated operational and institutional framework for the implementation of the Security Council’s financial sanctions, particularly those relating to the immediate freezing of the assets of the persons and entities concerned and the determination of the conditions required to include persons on these lists.

“The challenge now is to make this mechanism succeed by relying on good practices in comparative experiences and to develop an action plan fully imbued with the FATF criteria, with all requirements in terms of immediacy, effectiveness and efficiency in the execution of UN sanctions”, Daki pointed out.

“The establishment of this Committee will contribute to overcome the negative remarks contained in the mutual evaluation report and support the kingdom’s efforts to get out of the situation of reinforced monitoring, especially in light of the positive momentum in which are engaged a set of departments and national bodies concerned with this project”, he said.

In this regard, Daki reported on the positive results achieved through this commitment, including 651 prosecutions for money laundering.

For his part, The First President of the Court of Cassation, deputy president of the Supreme Council of the Judiciary (CSPJ), Mohamed Abdennabaoui, welcomed the official installation of this committee, which demonstrates a real willingness to comply with international standards in the fight against terrorism, as well as it reinforces the credibility of the Kingdom in this area.

Abdennabaoui also stressed the interest of Moroccan authorities in international cooperation in the fight against the financing of terrorism, noting that the process of creating the Committee has accelerated over the past six months with the adoption of necessary legislative changes.

For his part, the president of the Financial Intelligence Processing Unit (UTRF), Jawhar Nfissi, stressed the dynamics that marks the fight against terrorist financing in Morocco over the past four years, thanks to the efforts of various stakeholders.

“The Kingdom has become an example at the international level in this area, which is likely to strengthen its leadership position and contribute to the promotion of peace and security”, he pointed out.

Abdellatif Jouahri, Governor of Bank Al-Maghrib (Morocco’s central bank), announced the upcoming organization of training workshops in January and February, with the participation of international experts, adding that his institution will ensure the involvement of the Ministry of Justice and the UTRF in this process.