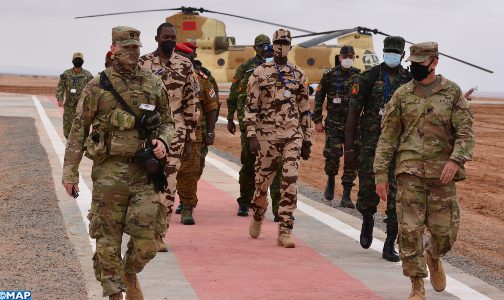 A group of military observers from thirteen countries on Tuesday attended at Cape Draa (north of Tan-Tan) the operational activities of the Moroccan-U.S. combined exercise “African Lion 2021”. Colonel Hassan Idouch, in charge of the exercise at Cape Draa, said that the presence of these military observers confirms the international dimension of the combined exercise African Lion 2021.

Idouch told MAP that this exercise is being held until June 18, upon the high instructions of King Mohammed VI, Supreme Commander and Chief of General Staff of the Royal Armed Forces (FAR), and involves, in the region of Cape Draa, several units of the FAR in addition to other military units of the United States and Senegal. This exercise is intended to strengthen the maneuvering capabilities of the participating units, consolidate interoperability in the planning and conduct of joint operations and train the air component in the conduct of fighting, support and air refueling operations, he explained.

On this occasion, the military attaché of the American embassy in Rabat handed to Colonel Hassan Idouch, on behalf of the Moroccan soldiers in Cape Draa, a medal in recognition of the perfect coordination and professionalism shown by the FAR elements to ensure the smooth conduct of this exercise. As part of the African Lion 21, a synthesis exercise took place Tuesday at the military seaport of Agadir, in order to assess the reactivity of the Rescue Unit of the Royal Armed Forces to face a crisis situation presenting nuclear, radiological, biological and chemical (NRBC) risks.

The 17th combined Moroccan-American exercise “African Lion 2021” will run through June 18, 2021, in the regions of Agadir, Tifnit, Tan-Tan, Mehbes, Tafraout, Ben Guerir and Kenitra, involving thousands of multinational militaries and a very large number of land, air and sea equipment. In addition to the United States of America and the Kingdom of Morocco, this exercise is marked by the participation of Great Britain, Brazil, Canada, Tunisia, Senegal, the Netherlands, Italy as well as the Atlantic Alliance and military observers from nearly thirty countries representing Africa, Europe and America.