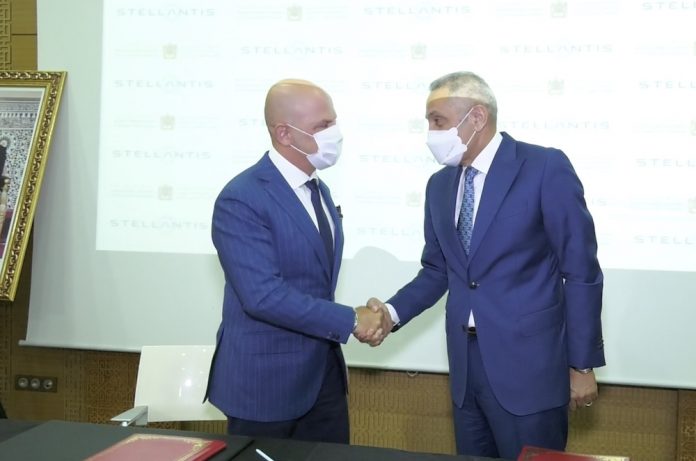 The Stellantis ecosystem in Morocco has taken a new step forward with the signing, Thursday in Casablanca, of a new Amendment that strengthens commitments to the development of the automotive industrial sector in the Kingdom.

Signed by the Minister of Industry, Trade and the Green and Digital Economy and the Chief Operating Officer of Stellantis Middle East and Africa, this Amendment aims at launching a new 100% electric vehicle, developing the local supplier base with a growth in the volume of purchases in Morocco of 2.5 billion euros (€Bn) in 2023 and an ambition to reach 3 billion euros in 2025, as well as creating about 3,000 highly qualified positions for engineers and senior technicians in 2022, in addition to the 2,500 production jobs already created at the Kenitra plant.

Part of the implementation of the industrial partnership signed in June 2015 under the Effective Presidency of His Majesty King Mohammed VI, it is also meant to develop the breadth and depth of local integration, with increased competitiveness of sourcing in partnership with Morocco that will support investment efforts and ensure the supply of competitive decarbonized energy.

“We are pleased to take this new strategic step in our partnership with the Kingdom of Morocco. After exceeding the objectives set in 2015, this new agreement aims to accelerate the development of the Moroccan automotive sector by contributing to the training of Moroccan personnel and targeting a competitiveness at the best world level”, said, on this occasion, Samir Cherfan, Chief Operating Officer Stellantis Middle East and Africa.

For her part, the Director of Automotive Industries at the Ministry of Industry, Trade and Green and Digital Economy, Kenza El Alaoui, described the signing of this new Amendment as a “strategic” step.

This new step comes at a time when the Stellantis Group has announced that production of the Opel Rocks-e, a new electric vehicle that meets changing mobility needs, will take place at its Kenitra plant in Morocco, alongside the Citroën AMI.