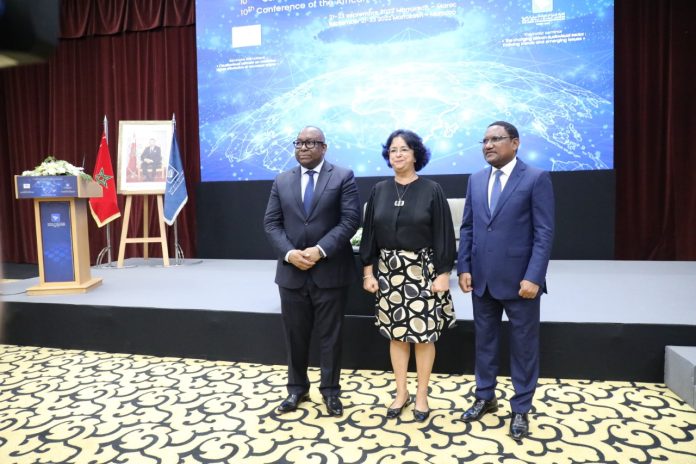 The High Authority for Audiovisual Communication (HAAC) has just joined the presidency of African Communication Regulation Authorities Network (ACRAN), for a two-year term, after having been elected in December 2018 to the vice-presidency of this Network which gathers 36 countries.
The handover ceremony between Mr. Joseph Chebongkeng Kalabubsu, President of the National Communication Council of Cameroon and the outgoing President of ACRAN and Mrs. Latifa Akharbach, President of the HAAC took place on Friday in Marrakech, in the presence of the heads of delegation of the regulatory authorities of the 18 countries participating in the 10th Conference of African Communication Regulatory Authorities (CACRA) held from 21 to 23 September in the Ochre City. During this statutory meeting which constituted “a re-launch of ACRAN activities “, after the interruption imposed by the Covid-19 pandemic, Mr. René Bourgoin, President of the High Authority of Audiovisual Communication (HAAC) of Côte d’Ivoire was elected Vice President for the biennium 2022-2024.
In a statement to the press, the President of HAAC and new President of ACRAN, Mrs. Latifa Akharbach, emphasized that this confidence in HAAC by the African regulatory authorities of the audiovisual sector is the result of the constant mobilization shown by this national authority in favor of the promotion of inter-African cooperation and especially, the manifestation of the credibility and “soft power” enjoyed by the Kingdom within the Continent due to the enlightened vision of King Mohammed VI and the permanent action of the Sovereign in favor of a strong and united Africa.

“I pledge to serve with dedication the noble ideals of our pan-African organization and contribute to its dynamization,” he pointed out, ensuring that “it is a quality pairing that has been brought to the head of this pan-African organization”.
In this context, Mr. Bourgoin noted that Morocco is a model at the continental level in terms of regulation of the audiovisual field, reminding that the engineers of the HAAC have established an effective monitoring system, the HMS (Haca Media Solutions), an application that is implemented in most African countries for the benefit of the regulation of the audiovisual in this continent.
In addition to the strong participation of regulatory authorities representing English, Portuguese, French and Arabic speaking African countries, the Marrakech conference was marked by the accession of a new member to ACRAN.
It is the Independent Media Commission of Sierra Leone whose delegation was led by its president Mr. Victor Massaquoi.

Created in 1998 in Libreville, Gabon, ACRAN constitutes the multilateral framework of cooperation and consultation of reference between media regulatory authorities of the African continent and contributes to establish the technical, professional and institutional authority of its 36 member authorities. This Network aims at strengthening the contribution of media regulators to the consecration of a pluralist African audiovisual landscape, promoter of the diversity of African societies, respectful of the principles of human rights and vector of democratic and humanistic values.