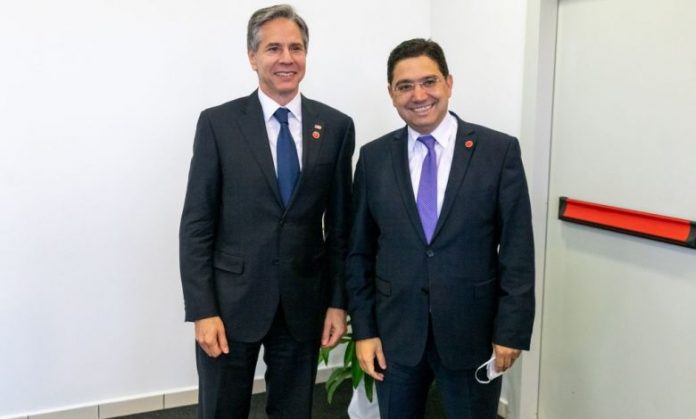 Minister of Foreign Affairs, African Cooperation and Moroccans Abroad, Nasser Bourita, on Monday held talks in Rome with US Secretary of State Antony Blinken. These discussions, which took place on the sidelines of Bourita’s participation in the ministerial meeting of the Global Coalition to Defeat Daesh, focused on the bilateral strategic partnership and the means to strengthen it within the framework of the vision of HM King Mohammed VI regarding strong multidimensional relations between Morocco and the United States of America.

The two sides also discussed issues of common interest as well as some regional issues in which Morocco, thanks to the vision of HM the King, plays a key role, particularly with regards to the Middle East and the Libyan crisis. During a phone call on April 30, Bourita and Blinken welcomed the strong and sustainable strategic partnership between the Kingdom of Morocco and the United States.

On this occasion, the US top diplomat commended the advances made by Morocco over the past two decades under the leadership of HM King Mohammed VI in terms of political reforms, economic progress and social development. Blinken also praised the Sovereign’s leadership in the fight against climate change and investment in renewable energies, and the promotion of green economy.

The two officials also discussed regional issues of common interest, including the situation in Libya and the Sahel. In this regard, Blinken praised the stabilizing role played by Morocco in a tumultuous region.