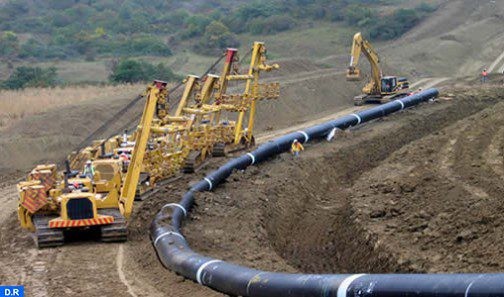 Nigeria and Morocco are planning to build the world’s longest offshore gas pipeline to transport gas between the two countries, crossing 11 others in West Africa, local media reported Tuesday.

Quoted by the media, Tolu Ogunlesi, media adviser to Nigerian President Muhammadu Buhari, said on his Twitter account on Sunday that the partnership, which was between the Nigerian National Petroleum Corporation (NNPC) and Morocco’s Office National des Hydrocarbures et des Mines (ONHYM), was initially signed by the two countries in June 2018.

He said that “Nigeria and Morocco are teaming up to build the world’s longest offshore pipeline,” the same sources pointed out.

“It will carry gas from Nigeria to Morocco to Europe, crossing 11 West African countries,” Ogunlesi said.

On Monday, Nigeria’s Minister of State for Petroleum Resources, Timipre Sylva, explained that the project, which is an extension of the West African Gas Pipeline project and already carries gas from Nigeria to Ghana, is at the stage of studying and finding financial partners to take it to Morocco where it will be connected to the European market.

He revealed, according to local media, that the Organization of Petroleum Exporting Countries (OPEC) and Russia are among the international bodies ready to invest in the Moroccan-Nigeria gas pipeline project.

“OPEC is also interested in the project and has expressed its interest,” he added.

However, the minister stressed that “we have not yet fully concluded a financial arrangement. There are many people expressing interest. There is a lot of international interest, investor interest in the project, but we haven’t really identified the investors we want to work with.”

“For now, the two investors in this project are Nigeria and Morocco, we are the two countries that are ready to join forces to develop this pipeline,” he said.

Sylva said “this administration cannot complete the Moroccan-Nigeria pipeline, but we can at least get it to the point of departure before we leave” so that subsequent administrations can complete it.