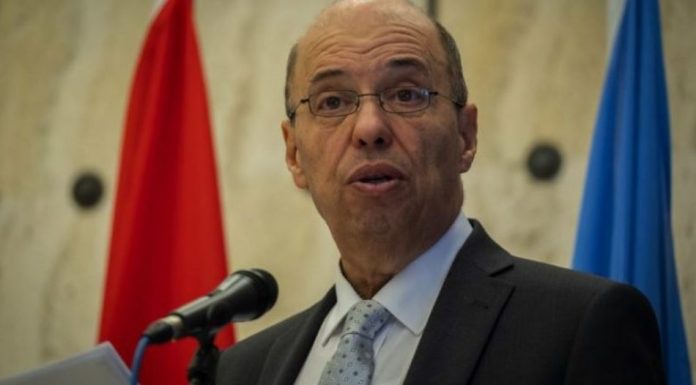 The Moroccan Ambassador to the United Nations Office at Geneva, Omar Zniber, has once again denounced the displaced attacks and outrageous rambling with the same untruthful rhetoric by the Algerian delegation at each session of the UN Human Rights Council (HRC) on the issue of the Moroccan Sahara. “These hysterical attacks, politically motivated, have absolutely nothing to do, neither with the agenda of the Human Rights Council, nor with the subjects discussed, or with the concerns which are and remain at the heart of our debates”, said Zniber in a letter to the diplomatic missions accredited to Geneva ahead of 47th session of the HRC, which will open on June 21.

In reality, these attacks only reflect the will to introduce controversy on the question of the Moroccan Sahara, he explained, noting that the territorial integrity of the Kingdom is the subject of an absurd and obsessive hostility on the part of the Algerian regime which has been mobilizing for this purpose, for nearly half a century, irrelevant financial and diplomatic resources, also targeting the Human Rights Council which fortunately remains judiciously indifferent to these deliberately calculated attempts. After recalling “the content of the outrageous declarations by the representative of Algeria, made during the 46th Session, specifically attacking the constitutional institutions of the Kingdom of Morocco and also using insulting accusations and terms, on the economic development of my country”, Zniber insisted that this culpable hostility manifests itself permanently, through dozens of successive declarations by the Algerian regime, which systematically works, at the highest authorized level in the hierarchy, to attack its Moroccan neighbor on the recovery of its Sahara, which says a lot on the direct, self-interested and motivated implications on this issue, including for reasons intrinsic to this regime which remains hostage to geopolitical calculations from the cold war.

He protested, in this regard, against the recent intimidation of the representative of Algeria, who addressed certain members of the Council, by an unacceptable terminology, very often used by his bosses under cover, and threats of severing relations for the simple reason that they wished to contribute to an informal dialogue with the High Commissioner for Human Rights on the absolute necessity to avoid politicizing or instrumentalizing the issue of the Sahara. A fortiori, by backing and supporting separatism, the Algerian leaders disagree with the essential foundations of human rights for peace and harmony. They should realize, whether they like it or not, that the disease of separatism that they promote is not only a mortal danger of dividing populations, but also an existential threat, with disastrous consequences, against stability and the future of States, not only in our region, but in the African continent and the rest of the world, said the Ambassador.

It is regrettable that, for many decades, the only real objective assigned to foreign policy and assumed by the diplomacy of the neighboring country, has been limited to systematic and marked hostility towards Morocco, including by the unilateral closure of borders for nearly 30 years, without valid motivation, other than the deprivation of Algerian citizens of movement, in flagrant contradiction with respect for the most essential human rights, he noted. Zniber denounced, in this regard, the unfortunate intentions of the Algerian delegation which does not hesitate to seek confrontation and drag other Council delegations to a dead end, but whose real motive is to hamper the political solution of the regional dispute over the Sahara, based on the autonomy initiative, which the United Nations Security Council, which stems from the international community, considers “credible and serious”. Contrary to the untimely declarations made during the 46th Session, and the isolated remarks by the Algerian representative, wanting to attack Morocco, the situation in the southern provinces reflects exceptional economic and social development, a peaceful, active and intensive political life, and the openness of these provinces to multiple international activities, including the visit of many delegations of parliamentarians, diplomats and lecturers, he noted.

He went on to say that Morocco has also, on multiple occasions, sent invitations to all special procedures and to many international NGOs, to see firsthand, the full exercise of rights by the populations, through their representative who are now interlocutors at the level of the United Nations, expressing notably the voice of the populations of the Sahara within the Moroccan delegations during the round tables held under the auspices of the United Nations, as well as within the bodies having also the exclusive task to promote the political solution. “In accordance with its internationally and unanimously recognized practices of dialogue, openness and respect for international standards, Morocco has never chosen the path of aggression and adventure, in any forum whatsoever, especially the Human Rights Council, which is tasked with the respect for human rights on the basis of dialogue, understanding, and mutual respect”, underlined the ambassador.

However, the Kingdom does not accept being unduly attacked, in particular by the representative of a regime seriously questioned on its mass violations of human rights, a regime which shelters, arms, directs and controls a separatist group whose leaders and notably “the leader” is prosecuted for crimes of rape, torture and war crimes, by judicial bodies of a third country, a so-called “leader” who attempts to evade these bodies, as formally established recently through his fraudulent identity theft, he said. Zniber took this opportunity to condemn the serious violations that are occurring, repeatedly, in the Tindouf camps in Algeria, regarding the enlistment of children in the armed militias of the separatists, the travel bans and the isolation of families in the camps of Tindouf.