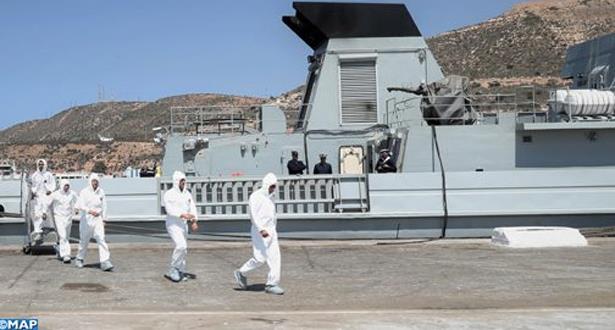 As part of the Moroccan-US cooperation in the field of disaster management, a synthesis exercise took place on Tuesday at the military seaport of Agadir, in order to evaluate the responsiveness of the Royal Armed Forces Rescue Unit (USS-FAR) to face a crisis situation presenting nuclear, radiological, biological and chemical (NRBC) risks.

This operation, in which a Senegalese unit participated, is part of the combined Moroccan-US exercise “African Lion 2021”, held under the High Instructions of King Mohammed VI, Supreme Commander and Chief of General Staff of FAR.

It particularly aims to assess the operational and tactical capabilities of the NRBC Company of the USS-FAR on responsiveness, deployment, rapid redeployment, recognition and detection capability, and the ability to decontaminate large numbers of infected individuals.

Among the objectives set for this synthesis exercise, which took place in the presence of Brigadier General Mohammed Jamil of the Staff of the South Zone and Major General Andrew M. Rohling, the U.S. Army Southern European Task Force, Africa commander and the U.S. Army Europe and Africa deputy commanding general, also includes the assessment of the responsiveness of the USS-FAR to deal with a NRBC crisis situation that could occur throughout the national territory, in order to test their ability to deploy by air.

In a statement to MAP, El Khadiri Yassine, commander of the NRBC Company of the USS-FAR, said that this operation intends to assess the chemical risk and human damage through the mobilization of specialized teams and logistics equipment.

For his part, Lucas Hoffman, commander of the U.S. Army said that “We are delighted with this exercise, which is an opportunity to show the different capabilities and strengthen regional cooperation”.

For his part, Mamdi Ndaye, commander of the rescue unit under the firefighters of Senegal stressed that his country participates in this exercise in the military port of Agadir, through a detachment of firefighters composed of 25 elements, noting that this operation took place in perfect synergy with the Moroccan and US teams.