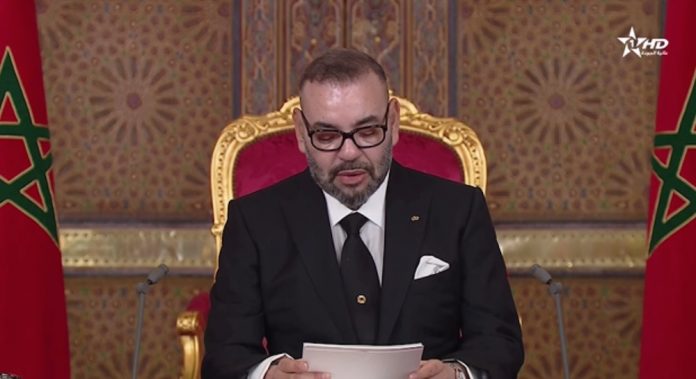 HM King Mohammed VI on Friday delivered a speech to the Nation on the occasion of the 68th anniversary of the Revolution of the King and the People. Here follows the full text of the royal speech:

“Praise be to God, May peace and blessings be upon the Prophet, His Kith and Kin

Dear Citizens, There is no better occasion to remember the values of loyalty and of sacrifice for the sake of the homeland’s freedom and independence than the commemoration of the Revolution of the King and the People.

This is more than just a historical event. It is an ongoing revolution which has inspired successive generations, celebrating the same spirit of true patriotism and eagerness to defend the homeland, its institutions and sacred values. This commemoration falls a matter of days before the elections. It also coincides with the launch of a new set of projects and reforms that will be carried out within the framework of the new development model and the national charter for development.

The upcoming general, regional and local elections will be held on the same day, a fact which attests to the vibrancy of the country’s democratic experience and the maturity of the Moroccan political system. Dear Citizens,

Elections are not an end in themselves. Rather, they are a means to set up credible institutions that serve the citizens’ interests and defend the nation’s causes. I believe a state’s strength comes from institutions and from the unity and cohesion of the nation’s components. That is our weapon for the defense of our country in times of adversity, crisis or threats.

This was clearly confirmed by the carefully planned attacks mounted recently against Morocco by some countries and organizations known for their hostility towards our country. Morocco is a target because it is a country steeped in history – it has existed for more than twelve centuries, not to mention the nation’s longstanding Amazigh history – and it is governed by a citizen-based monarchy which has existed for more than four centuries, and which is rooted in a solid bond between the throne and the people.

Morocco is also a target because of the security and stability it enjoys; these are invaluable assets, especially in light of the upheavals characterizing today’s world. Nevertheless, and by the grace of the Almighty, Morocco enjoys a sterling reputation and indisputable prestige. It also has a solid network of relationships and connections and is a trustworthy, credible nation at the regional and international levels.

Dear Citizens, Like some other countries of the Arab Maghreb Union, Morocco is the target of deliberate, hostile attacks.

The enemies of the Kingdom’s territorial integrity build their positions on ready-made, yet obsolete, premises. They simply do not want Morocco to remain free, strong and influential. Regrettably, a few countries, especially European ones, which are traditional partners, fear for their economic interests, markets and spheres of influence in the Maghreb region.

Some of their leaders fail to understand that the problem does not lie in the systems of Maghreb countries, but in their own. These are systems which continue to feed on the past and cannot stay abreast of new developments. Recent months have shown that these countries are facing significant inadequacies when it comes to respecting the state’s institutions and its basic, traditional functions. Therefore, they want us to become like them. And to that end, they invoke unfounded pretexts and accuse our national institutions of failing to uphold rights and freedoms in order to tarnish their reputation and try to undermine the esteem and great respect enjoyed by our country.

They do not want to recognize that the rules of the game have changed – that our countries are able to manage their own affairs and use their energies and resources for the benefit of their peoples.

Thus, all possible means – legal and otherwise – have been used, roles assigned and tremendous resources leveraged to embroil Morocco in problems and disputes with some countries. In fact, some reports have really crossed the line. Instead of calling for Morocco’s efforts for balanced development in the region to be supported, they made recommendations to impede Morocco’s progress, arguing that its development creates an imbalance among Maghreb countries.

Furthermore, they concocted a full-fledged campaign to distort the image of our security institutions and undermine their usefulness and effectiveness in preserving Morocco’s security and stability. These institutions also provide support and coordinate action at the regional and international levels, as acknowledged by a number of those countries themselves. And since every cloud has a silver lining, the plots hatched by the enemies of our territorial integrity only enhance Moroccans’ faith and their resolve to continue defending their homeland and its interests.

Whether those parties like it or not, we shall continue on the path we have chosen for ourselves, despite the enemies’ exasperation and the envy of those who hate us. Dear Citizens,

Some people claim that Morocco is being attacked because it has changed its political and strategic direction, or because of the way it is handling some diplomatic issues. That is simply not the case. Morocco has, indeed, changed, but not in the way they want it to. Morocco does not accept that its best interests be trampled on. At the same time, my country is keen to have strong, constructive and balanced relations, especially with our neighbors.

That same logic is governing our policy today regarding the relationship with our neighbor, Spain. It is a fact that these relations have recently come up against an unprecedented crisis, which shook mutual trust and raised many questions as to their future.

However, we have worked with the Spanish side in a composed, clear and responsible way. In addition to the traditional immutable values on which these relations are based, we are keen, today, to strengthen them, bearing in mind the need for a common understanding of the two nations’ interests.

In this regard, I have personally and directly followed the progress of the dialogue and discussions between the two countries. Our goal was not merely to overcome this crisis, but to turn the situation into an opportunity to reconsider the foundations and determinants of these relations.

With a feeling of optimism, I sincerely look forward to continuing to work with the Spanish government and with the Spanish Prime Minister, His Excellency Mr. Pedro Sanchez, to usher in a new, unprecedented phase in the relations between the two countries, on the basis of trust, transparency, mutual respect and the fulfillment of obligations. The same commitment is at the center of the partnership and solidarity between Morocco and France, and I personally entertain solid relations based on friendship and mutual esteem with the French President, His Excellency Mr. Emmanuel Macron.

Dear Citizens, The Revolution of the King and the People was a watershed in Morocco’s struggle to achieve freedom and independence. Today, we are on the verge of a new phase, which requires commitment to the spirit of true patriotism in order to rise to internal and external challenges.

I should like to take this opportunity to honor the memory of the nation’s valiant martyrs, particularly the hero of the liberation, my venerable grandfather, His Majesty King Mohammed V, and his companion in the struggle, my revered father, His Majesty King Hassan II – may they rest in peace. Wassalamu alaikum warahmatullah wabarakatuh.”