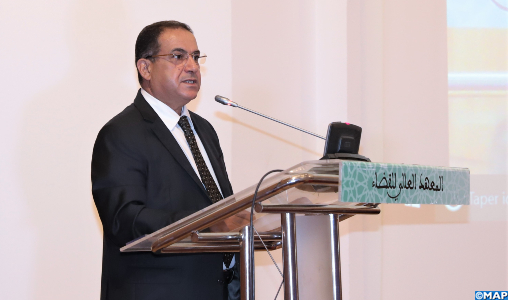 Speaking at a meeting of communication and coordination organized by the presidency of the prosecutor’s office with the services under the Directorate General of National Security (DGSN) to exchange ideas and visions on joint action and coordination, Dkhissi said that the resolution of these cases has resulted in the arrest of 4,355,422 suspects, including 919,127 people, who were the subject of arrest warrants nationwide for various crimes, were apprehended in the context of these security operations.

Dkhissi, who represented the Director General of National Security at this meeting, noted that these interventions have contributed to the seizure of 170,919 knives, 311,890 cell phones, 16,277 vehicles and 17,104 motorcycles.

Regarding the fight against drugs and psychotropic drugs, the director of the Judicial Police said that the security services have proceeded, during the same period, to the treatment of 517,166 cases related to drug crimes (possession, consumption and trafficking), resulting in the arrest of 650. 150 defendants, including 1,770 foreigners, and the seizure of record quantities of drugs (more than 787.299 tons of cannabis, nearly 6.948 tons of cocaine, 6,376,454 units of psychotropic drugs and more than 52.7 kg of heroin).

During the same period, the Moroccan authorities, continued Dkhissi, have executed 842 letters rogatory out of 1,075 received, noting that these letters rogatory concern the extradition to Morocco of a total of 154 persons including 8 foreigners arrested at the international level and the extradition from Morocco to abroad of 180 foreigners arrested at the national level on the basis of international warrants issued by the authorities of their countries.

And to underline that in order to consolidate these positive results, fruits of the daily work of the services in charge of the mission of judicial police alongside the various units as well as those in charge of the maintenance of the public order as those in charge of following and preventing the dangers and threats, the pole of the general direction of the national security and the surveillance of the national territory committed itself in the national building site of the human rights by adopting fundamental and structured programs of training and framing for the benefit of the whole personnel of the Security of various specialities and by engaging in the places of detention of the people deprived of their freedom to conform to the principles adopted within the framework of the national and international mechanisms of human rights.

The Director of the Judicial Police stressed that this fundamental daily security action continues, day and night and in all circumstances, and is set up as a major lever for the promotion of human rights in the Kingdom, thus accompanying the dynamics marking the Moroccan society and allowing to remain faithful to the constitutional and international commitments in accordance with the aspirations of His Majesty King Mohammed VI to defend the rights and freedoms of all those who are on the territory of the Kingdom.