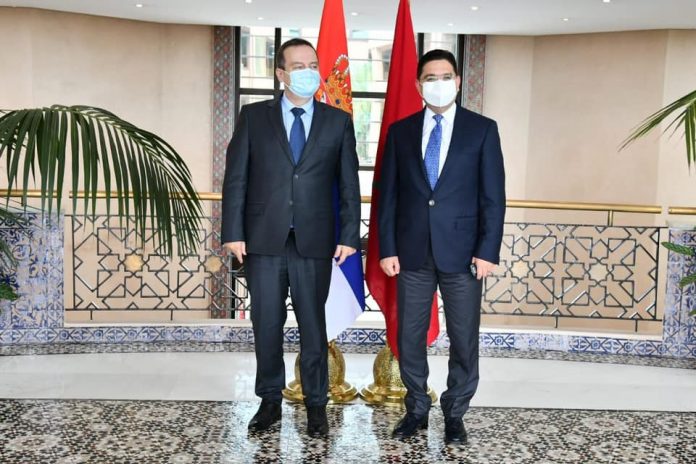 Minister of Foreign Affairs, African Cooperation and Moroccans Abroad, Nasser Bourita, met, Wednesday in Rabat, with president of the National Assembly of Serbia, Ivica Dačić, who is on a friendship and working visit to Morocco leading a large delegation.

During this meeting, the two parties highlighted the long-standing relations between the two countries and discussed ways to promote them further, through the holding of a commission and an economic forum.

In a statement to the press after the meeting, Dačić said that his visit to Morocco comes in the context of strengthening the “very good relations” between the two countries.

“I am here in Morocco with the members of the parliamentary delegation to make our contribution to strengthening our very good relations,” he said, praising the very strong long-standing ties between Serbia and the Kingdom.

The president of the National Assembly of Serbia recalled the role of his country and Morocco in the creation of the Non-Aligned Movement (NAM) which will celebrate its 60th anniversary next September.

Dačić reiterated Serbia’s support for the Kingdom’s territorial integrity. “We support the principle of the territorial unity of Morocco. We are friends and we will continue this solidarity as well as our mutual support,” he stressed.

For his part, Bourita highlighted the improvement of bilateral relations in recent years, stressing that these ties “have developed at all levels”.

Morocco is “an essential partner of Serbia on the African continent,” he said, noting that the two sides have agreed to hold before the end of the year the economic commission.

He also recalled that Rabat and Belgrade had agreed to hold an economic forum during the visit paid last May by his Serbian counterpart, Nicola Selakovic.

Bourita also praised the role of the Serbian Parliament in strengthening the solid historical relations that cover all areas.