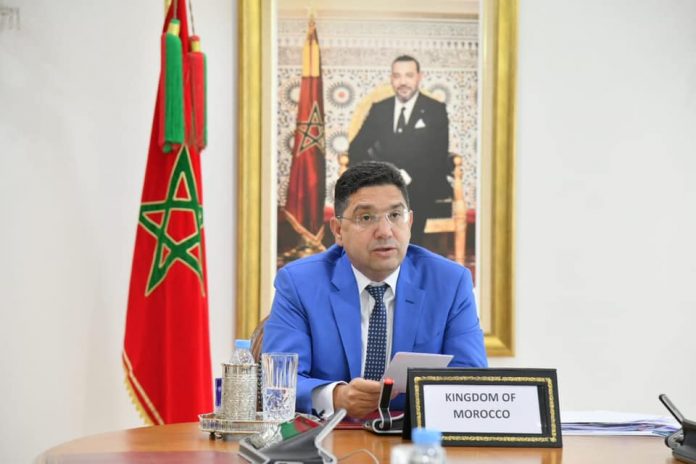 Universal and affordable access to anti-Covid vaccines remains the only way for a fair exit strategy from the health crisis, said on Thursday the Minister of Foreign Affairs, African Cooperation and Moroccans Abroad Nasser Bourita.

“At a time when the virus mutates and the pandemic continues, universal and affordable access to vaccines remains the only way for a fair exit strategy for all”, indicated Bourita during the first meeting of the International Forum on cooperation in the field of vaccines against Covid-19, organized in virtual mode by China.

“Developing the vaccine is essential, but ensuring access to the vaccine is the ultimate goal,” noted the minister, highlighting the Kingdom’s efforts in the fight against the novel coronavirus pandemic, as well as its partnership with the China in the field of vaccines.

In this regard, the minister recalled that China has always stood by the side of Morocco with a high sense of solidarity and efficiency, “which is matched only by Morocco’s confidence in Chinese expertise”, adding that “the momentum initiated by HM King Mohammed VI and His Excellency President Xi Jinping, through their August 2020 phone call, paved the way for fruitful cooperation.

” As His Majesty the King rightly asserted in His Speech to the Nation on the Throne Day: “We have every right, today, to celebrate Morocco’s achievements in the “battle for vaccines” – which is far from being an easy one – as well as the successful roll-out of the national vaccination campaign and the citizens’ massive engagement in it,” he said, noting that this satisfactory progress is largely based on the vaccine developed by the Chinese company Sinopharm.

The approval of the World Health Organization and the absence of serious adverse effects of the vaccine, are all factors that leave us “skeptical” about its questioning by some actors, argued Bourita, adding that such a position, which is more political than scientific, “only widens a new North-South divide”.

Morocco has resolutely chosen to join forces with the Chinese company Sinopharm to create an industrial unit for the production of vaccines, the minister said, noting that beyond the legitimate national objective of health sovereignty and self-sufficiency, this initiative is a response to the vital needs of developing countries, particularly in Africa, where access to vaccines is low.

To date, the vaccine grown on Vero cells is one of the most equitably accessible vaccines. It is based on efficient technology, it has few logistical constraints and its price remains within the reach of developing countries, said Bourita, saying he is proud to see that the strategic partnership between Morocco and China is “a lever for cooperation that brings health security and hope to the whole planet”.