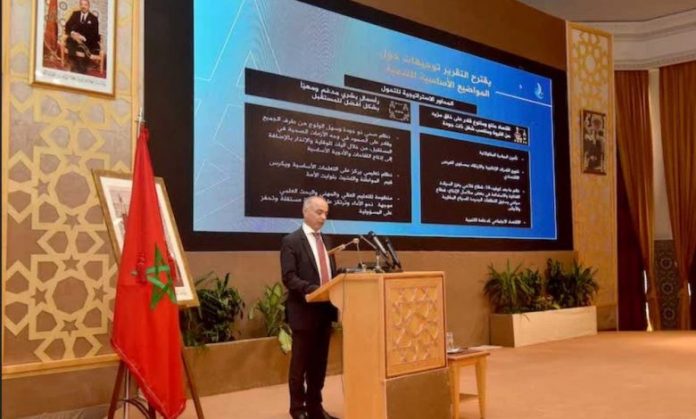 The Ad-hoc Committee on the Development Model (CSMD) presented, on Saturday in Paris, for the first time internationally, the conclusions of its general report on the New Development Model, to the Moroccans of the world.

President of the CSMD, Chakib Benmoussa, accompanied by two members of the Committee, Rachid Benzine and Hamid Bouchikhi, took part in a conference-debate on the theme: “Morocco’s new development model – Liberating energies”, organized at the initiative of the Council of World Moroccan Experts (CE-MDM).

This meeting, organized in partnership with the Fondation Maison du Maroc and several associations of Moroccans around the world, was an opportunity for the president of the CSMD to present, before of a large audience, composed notably of Moroccan skills settled in France, presidents of associations and members of the Moroccan diaspora, the broad outlines of the new development model, which aspires to mobilize the capacities of Moroccans in order to accelerate the march towards progress and prosperity for all.

The conference also provided an opportunity to discuss Morocco’s new ambitions by 2035 and the role of Moroccans of the world in this development path.

On this occasion, Benmoussa, who highlighted the main aspects of the CSMD report and its ambitions, recalled the high solicitude of HM King Mohammed VI for the members of the Moroccan community abroad, as evidenced by the recent instructions of the Sovereign to facilitate the return of the Moroccans of the world to the motherland in summer period.

The great importance that the Kingdom attaches to its diaspora is also reflected by the strong presence within the CSMD of many Moroccan skills residing abroad. A dozen Moroccans from around the world participated in the drafting of the Committee’s report, he said, highlighting their rich contribution given the diversity of their experiences and skills.