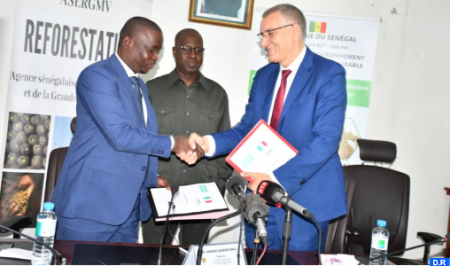 The OCP Foundation signed, Monday in Dakar, a 1.4 billion CFA Franc (US $2.2 Mln) agreement with the Senegalese Agency for Reforestation of the Great Green Wall (ASRGM) aimed at preserving biodiversity.

The agreement aims to support community agricultural development and to build the capacity of the agency in terms of supporting and supervising local biodiversity projects.

This is a great day. Aconsecration of common work with the Agency and a very committed team. We have just signed the first milestone,” the OCP Foundation Secretary-General, Abdelhadi Sohib, told reporters on the sidelines of the signing ceremony of the agreement, inked by the agency’s Director-General, Oumar Abdoulaye Bâ.

The Great Green Wall project raises the issue of the fight against climate change and the safeguarding of biodiversity, especially in Africa, Sobhi stated.

It is an African Union flagship initiative aimed at growing an 8,000 km-long green wall meant to combat desertification of the Sahel. Once complete, the Great Green Wall will be the largest living structure on the planet, 3 times the size of the Great Barrier Reef.