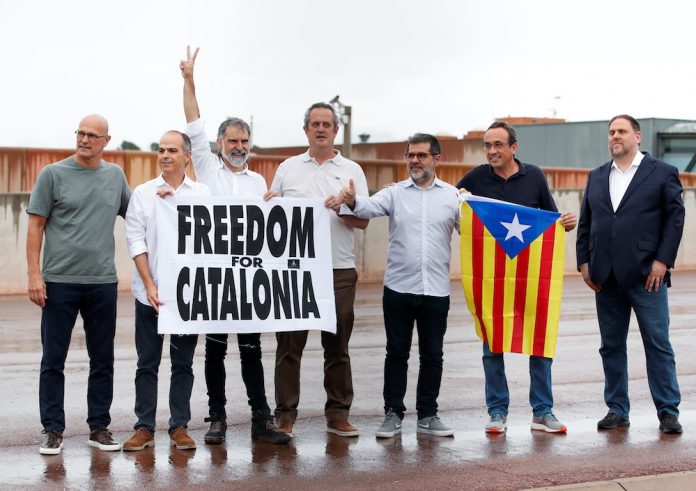 Carrying a banner demanding “freedom for Catalonia”, separatist leaders who were jailed over their role in a failed 2017 bid for independence walked out of prison on Wednesday after the central government granted them pardons.

Seven of the nine pardoned leaders were greeted by the pro-independence head of the Catalan regional government, Pere Aragones, outside the Lledoners jail, an hour north of Barcelona, Reuters footage showed.

“Amnesty is what we want and we will achieve it,” said former Catalan parliament speaker Carme Forcadell as she walked out of a separate jail in Barcelona, calling her release a “small victory”.

Catalan separatists are seeking a broad amnesty for all those involved in the 2017 independence bid.

The central government pardoned the nine politicians and activists in a goodwill gesture aimed at kickstarting negotiations on solving the political conflict between Madrid and the region.

They were sentenced in 2019 to between nine and 13 years for sedition and misuse of public funds, after an unauthorised referendum on a breakaway that led to a short-lived declaration of independence and Spain’s worst political crisis in decades.

The pardons are conditional, and a ban on the leaders holding public office remains in place.

Madrid has ruled out another referendum on independence.

“It is not just a question that it is unconstitutional, it is that we can’t keep fracturing the Catalan society,” Prime Minister Pedro Sanchez told parliament, answering calls from separatist legislators for another vote authorized by Madrid.

Meanwhile, conservative opposition parties have renewed their calls for Sanchez to resign over the pardons, arguing that the move undermines Spain’s unity.

Opinion polls show just about half of Catalonia’s population favours splitting from Spain.

The government also ruled out a blanket amnesty for around 3,000 people with legal cases related to the 2017 referendum, which would also include politicians who fled Spain such as former Catalan regional government leader Carles Puigdemont.

“There won’t be amnesty, there won’t be self-rule, what there will be is dialogue and politics,” said Regional Policy Minister Miquel Iceta.