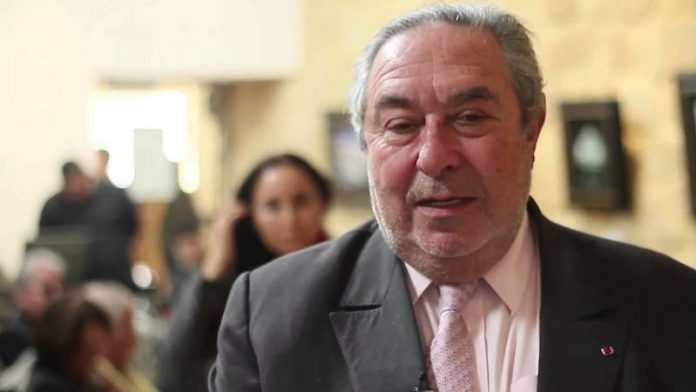 On May 27th 2021, the Wali of Tangier, Mohammed M’HIDIA, received Serge Berdugo, General Secretary of the Council of Jewish Communities of Morocco and a delegation of the Jewish Community Committee of Tangier, composed of Aron Abikzer, Vice-President and  Sonia Zagury, in charge of Cultural Heritage.

This working session reviewed the various projects launched by the Jewish Community of Tangier.

In a preliminary statement, Serge Berdugo brought to the Wali his great satisfaction with the progress of the restoration of the Assayag Synagogue under Phase II of the Rehabilitation of Jewish Heritage, approved by His Majesty the King, may God assist him, and the program to save the Medina of Tangier.

In accordance with Royal directives, this centenary place of worship is to house the future Jewish Museum of Tangier, the rehabilitation project of which has been entrusted to the architect Malika Laroussi and the museum’s realization to  Isabelle Timsit.

He evoked that the choice of this beautiful Synagogue, founded in 1890, in the district of “Siaghin” in front of Dar Niaba, was a response to the concern of restoring this site and creating a Museum so as to exhibit the artifacts, documents, photos and Judaica of Tangier, which the CIT has saved and inventoried in order to be integrated into a relevant circuit allowing visitors of the City of the Straits to appreciate the glory hours of Tangier’s Judaism :

Nahon Synagogue, Akiba Synagogue, the Jewish Museum of Tangier and the Historical Cemetery of Portugal Street.

The site work, which was launched by the “Dona and Haïm Benchimol” Foundation, the Israeli Community of Tangier and the Judeo-Moroccan Cultural Heritage Foundation, is expected to last 10 months.

The working visit carried out in the presence of officials of the Wilaya of Tangier including Alami, Secretary of the Cabinet of the Wali, Massoudi, Engineer of the Wilaya, Khadija Bari, Delegate of Urban Planning in the Wilaya, Malika Laroussi, Architect, Sonia Zagury and Aron Abikzer of the CIT and all the trades in charge of construction allowed to take stock of the state of progress of these important realization (see photos) and to make the necessary and useful changes.

The General Secretary informed the Wali of the decision of the CIT to put at the disposal of the Wilaya, the building of the “Cuna” the emblematic maternity of the Jewish Community in Tangier, which will be rehabilitated according to the norms so as to receive voluntarily the parturients of the City.

This philanthropic project will be carried out in collaboration with Dr. Abbadi and will include a School of Midwives and Specialized Nurses, directed by Dr. Sedraoui.

Finally, with all the authorizations being delivered, he announced the next opening of a Kosher restaurant within the Jewish Circle of Tangier.

For his part, the Wali said that the Jewish Community of Tangier has a rich history and cultural heritage that it is important to preserve as part of the common heritage of all Tangier. He valued the collaboration with the Committee of the Jewish Community of Tangier and expressed his satisfaction for the good progress of the projects undertaken by the Committee, including the Jewish Museum and the “Maternity La Cuna” and acknowledged the opportunity to open a Kosher restaurant.